It was awfully nice to go back to work this morning and not have to think about accreditation stuff, other than thinking about what to do with the big pile of papers and reports on my desk. I decided to leave that for tomorrow.

It was a relaxing weekend. On Saturday, we got up early and headed down to Marin County to hike out to Tennessee Beach, which is a fairly secluded spot on the Marin coast. It is a two-mile hike in, but not a very hard two miles. It was a spectacular day, so even though we got out there early, there were already all sorts of people on the trail.

Malida stops to take a picture of something along the trail. This view captures everything I love about West Marin. We are so fortunate to have this huge swath of land preserved for all time by the creation of the Golden Gate National Recreation Area back in 1972, just as developers were salivating over it.

We got down to the beach and hung out there for a while. We packed a picnic lunch and ate it as we watched the waves come in. Malida brought a book and read for a while, while I took pictures. I took a number of pictures for people who saw my camera gear and figured I knew how to use their iPhone camera. I always like taking pictures for people. 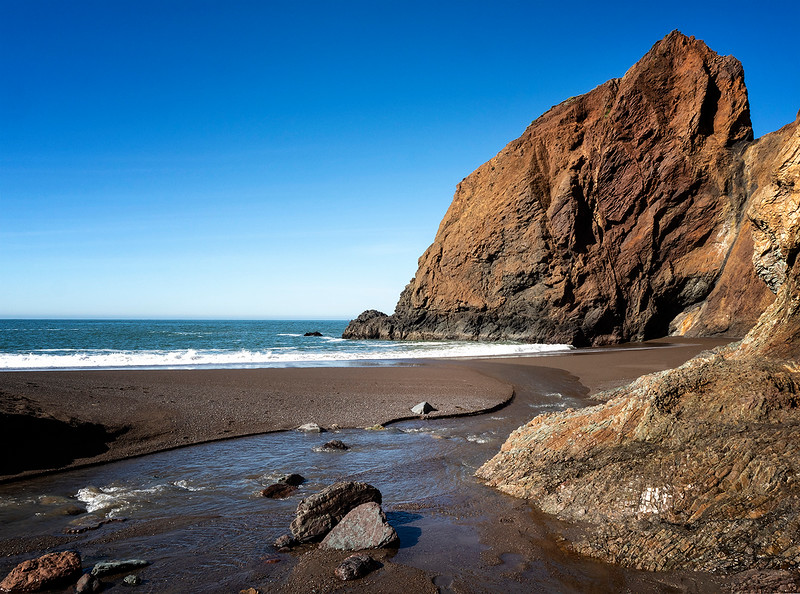 Our little corner of the beach. It was such a lovely day--sunny with temperatures in the high 60s, and just a gentle breeze. By the time we made it back to the parking area in the early afternoon, Half of San Francisco was there looking for a parking spot.

We headed over to San Rafael Joe's for a late lunch/early dinner, and had a delicious meal. I've been eating there since I was a kid, and it was a favorite of my grandparents. I had many late-night meals there when I lived in that area.

This last picture is one I took while Malida was reading at the beach. I posted it up on Facebook, and it got a lot more attention than I thought it would. I'm always kind of surprised when that happens. I never really know what people are going to like.
Collapse