I had a lovely, if active, spring break. I ended up driving a total of 1800 miles in about a week and a half, up and down the east side of the Sierras and into Death Valley. I took thousands of pictures, many of which I haven't taken a good look at yet. My class portfolio is due in a week, so I guess I should start figuring it out.

One of the more interesting things about my time out photographing, is that during the entire time I was out there, I only thought about photography. All the other stuff that had been nagging me just kind of disappeared. It was renewing and refreshing. I think that is one of the best things about these intensive photography trips. Almost like a form of meditation. 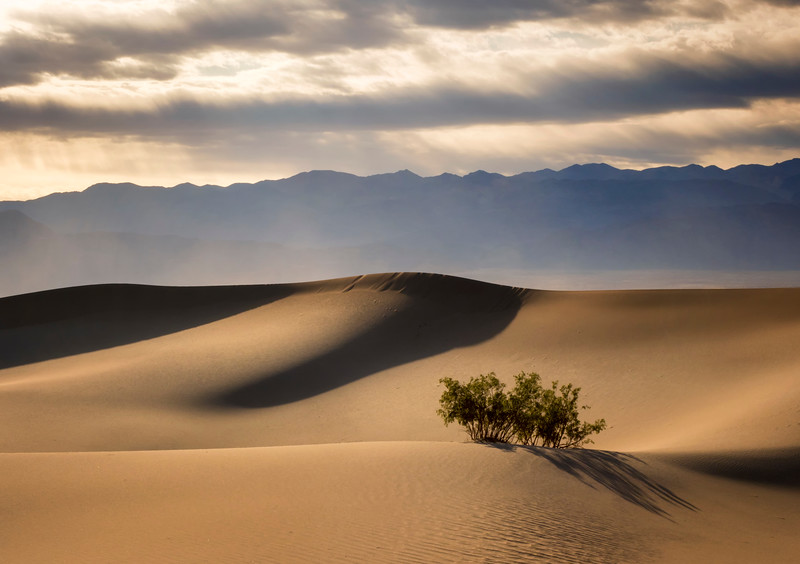 Death Valley was surprisingly beautiful. I wasn't really sure what to expect, but it was way more interesting than I would have imagined. I really only spent a day and a half there, and want to go back and explore more. I am thinking about going back next March, before it gets hot. I stayed at the old hotel in Stovepipe Wells, just across from the Mesquite Dunes.

I spent most of my time in the shadow of Mt. Whitney, in a place called the Alabama Hills, just outside the town of Lone Pine. There are lots of interesting rock formations, and I spent hours just wandering around through them. This particular formation is called the Mobius Arch, and that is Mt. Whitney, shrouded in clouds, in the background.

While I was there, I saw a photograph that Ansel Adams had made of the mountains in 1944, called "Winter Sunrise, Sierra Nevada from Lone Pine". I decided I would try to recreate it as best I could. I searched out the likely spot he took it from, but it was private fenced land. So I decided to take it from as close as I could get. It was east of town, near where the Owens River runs through the valley. I like how it turned out, but want to go back in either late December or early January to try it again closer to the time of the year the original was taken. Light and shadow.

I got back on Monday, did laundry on Tuesday, and then Malida and I headed up to Yosemite for a conference for community college faculty. I didn't take many pictures, as I was pretty pictured out by then. The conference was good, though.

Now I am back at work and jumping in fully to start my next project. It has to do with rewriting our curriculum and creating a seamless pathway to a bachelors degree for our students. That should take me almost right up to the time I want to retire, and then I will start wandering around and looking at things full time.
Collapse