On Sunday we decided we needed to get out of the house, so we headed over to the coast and wandered around Bodega Bay. It was a beautiful, breezy day. We had lunch at one of the seafood places along the bay and waited for the seagulls to come crashing in through the windows.

After lunch we drove around the bay out to Bodega Head, which is where the bay meets the ocean. I had never been out there before. It was spectacular. We walked down to the beach and took in the sea air. It was just what we needed. Too bad we can't bottle it and bring it home.

Malida looks out over the Marin landscape. There is no place in the world like West Marin County. It's all gentle hills, ocean views, and dairy farms.

Malida decided to work on Tuesday, and I decided to take a quick trip up over the Sierras to see how the high country looks. The Tioga pass opened just last week. I headed over the Monitor Pass to Lee Vining and spent the night there.

I went out to catch the sunset at Mono Lake. The water level was quite a bit higher than the last time I was there, and the path to the place I like to go was kind of swampy. I ended up falling over sideways into the water and the tufas, and scraped up my arm pretty good. I was about to call it quits, but decided to stick around to see if I could salvage a picture or two.

I was rewarded with this lovely image. It was worth the wait, and the ruined shoes.

In the morning I headed west over the Tioga Pass through Yosemite. I stopped along the way and walked around along the river for a while. There were lots of mosquitoes. I was surprised by how little snow was left. I avoided going down into the valley, and headed out the west entrance. 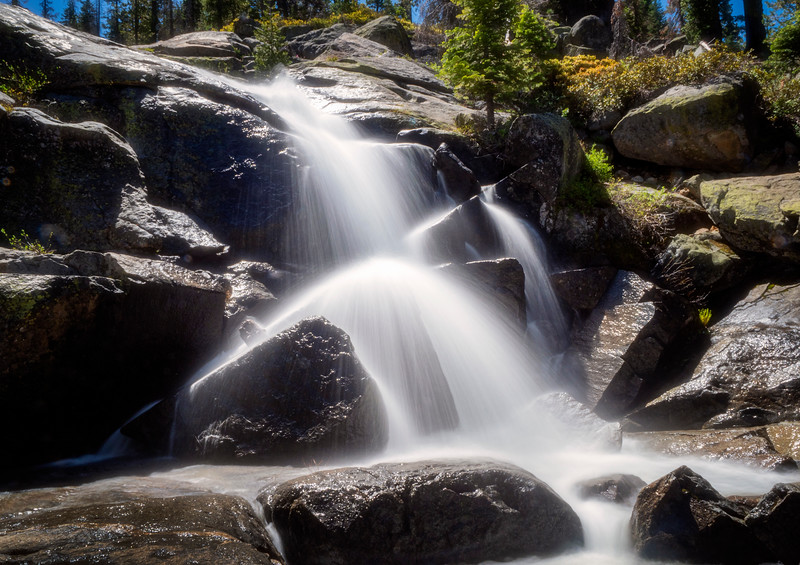 A small, unnamed waterfall somewhere along the road. I hiked down to take a look and tripped on a rock. I fell into a bunch of other rocks and cracked my watch face and the back of my camera. I need to be more careful. I made it home relatively intact.

Malida's biopsy is later this morning, so naturally I was awake at 4:45 thinking about it. She's worried about the procedure, and thinks it is going to take a week or two to recover from it. I was thinking it will be simple and straightforward, and more worried about what it will reveal.

As I was lying in bed thinking, I realized that she thinks they are going to make an incision to get the biopsy, while I was thinking they will use a needle. Actually, no one has said how it will be done, so it could be either way, I guess, though I think fine needle aspiration is how they do it. We'll know for sure at 10. Results next week.